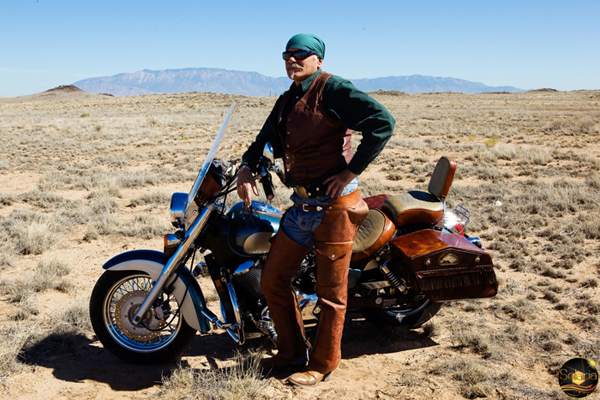 February 7, 2012 0 comment
Late last year, I had the fantastic opportunity to work with Dennis Foulkrod; a local actor, writer, director and all around jack-of-all film-making trades. The man brought his Harley out to the desert and I used the power of off-camera studio lighting to capture the strength and awesomeness of man and machine. This was probably […]
October 10, 2011 0 comment
I managed to round up a few Hawks in the desert for a photo shoot. These boys are the star players for the Volcano Vista High School football team. They’re not only great football players, but great kids as well – perfect gentlemen. Strobist Information (for the photography nerds): 580EX II + 2 – camera […]
March 3, 2011 0 comment
From the wedding of Chantal & Alex. Their two year anniversary will be in just a few months. Congratulations to this beautiful pair, who bestowed upon me the honor of having the opportunity to photograph their small and intimate wedding celebration. Here is a peek into their joyous day.
December 31, 2009 0 comment
One of the advantages of shooting outdoors it that there is always an interesting backdrop to be had here in New Mexico at any time of the year. These are pulled from a photo shoot I did a few weeks ago.
October 10, 2009 9 Comments
I worked with Alisia in the studio about a year ago, but this time we headed outdoors into the chilly winds and tried to capture a few natural looking lifestyle images. We got about a solid hour, before we had to stop due to weather. She has a great smile, is a trained actress and […]
March 22, 2009 3 Comments
Sometimes too much of a good thing is not a very good thing, but I think in this case, importing into Lightroom and plugging in a few presets did some amazing things to an ordinary photograph. The image on the left is out of the camera, the right is processed. This photo was taken during […]
February 22, 2009 0 comment
Elena got married six months ago at a fabulous destination wedding down in Peru. The only drawback was, no great photos of just her celebrating her day in her wedding dress. She looks quite model like, doesn’t she? Hard to believe she’s actually an engineer and math genius… Today was an amazing, near 70 degree […]
December 14, 2008 0 comment
Nancy and David needed last minute family portraits for Christmas Cards, so they called — we scheduled fast, I turned the photos around for them within a day. Might I add, we had a fabulous time out at the Petroglyph National Monument. (Albuquerque New Mexico’s west side)
July 28, 2008 0 comment
Brianne was looking for an intense and different style of senior portraits around various locations in Albuquerque. We went to three different locations, several outfit changes and had a wonderful time, despite the threatening weather.
June 28, 2008 2 Comments
Follow @solphoto